Asphaltene components of bitumen and black or brown solids that are insoluble in n-heptane addition to hydrogen and carbon containing large amounts of nitrogen, sulfur and oxygen. In general asphalten as highly polar aromatics complex with high molecular weight are considered. Various methods have been used to measure the molecular weight asphalten and varying amounts of 600 to 300,000, depending on the separation technique is obtained.

However general information obtained from the tests suggest that asphalten from 1,000 to 100,000 molecular weight and particle size of from 5 to 30 nm and the ratio of hydrogen to carbon one by one. The amount of asphaltene in the asphalt bitumen has a great impact on rheological properties. Asphalten would increase the amount of bitumen production more difficult, less penetration, softening point asphalt becomes more and more viscous as a result. The amount of asphaltene in pitch from 5 to 25 percent. Asphaltene chemical structure shown in the figure below. 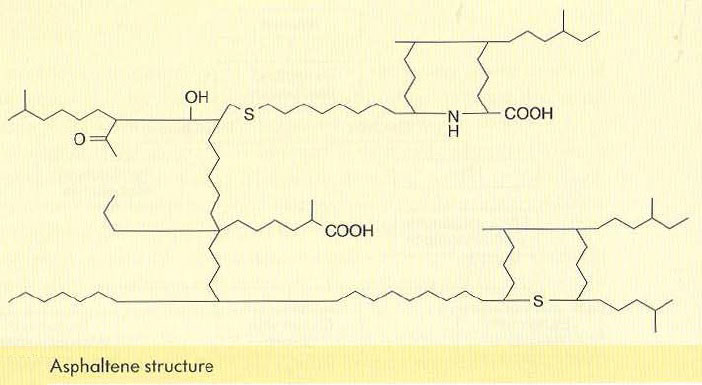