Polyurethane, polyether-polyester copolymers, olefin copolymers and styrenic block copolymers are thermoplastic elastomers four groups of which have proved to have the greatest potential for blending with bitumen. Thermoplastic rubber or thermoplastic elastomers styrenic block copolymers is well known that continuous polymerization styrene-Bvtady may Sequencing by N-styrene (SBS) or styrene-isoprene-styrene (SIS) to be produced. Alternatively, a precursor two consecutive polymerization of styrene and monomer block can be by the middle block with bonding agents produced by reaction. So in addition to linear copolymers, multi-arm copolymers are produced. As a branch or radial copolymer known 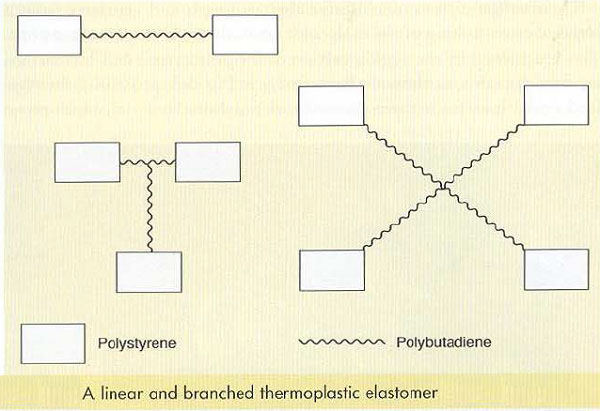 Thermoplastic elastomers strength and elasticity (elasticity) of crosslinking molecules to obtain a three-dimensional network. This outcome by the end of the polystyrene blocks to the host separate accumulation is obtained. As Figure 5-3 shows the physical cross-linking polybutadiene or polyisoprene rubber for matrix A is created. Power terminal blocks of polystyrene polymer and the middle block material gives an exceptional stretch. At temperatures above the glass transition temperature of polystyrene (100 ° C), polystyrene becomes soft and receptive weak and even pressure will be separated and will facilitate processing. After cooling again host joins strength and elasticity is restored thermoplastic or thermoplastic materials are the means.

The structure of bitumen
The type and concentration of polymer
Cutting rates caused by agitator
When the polymer is added to the hot bitumen, tar began to influence the recipient of styrene polymer particles because they begin to dissolve and swell. When this happens, if we want to happen in a reasonable time player shear value applied to the polymer particles swell is important. So moderate and preferably high shear mixer for thermoplastic elastomers are satisfied it is necessary to be broadcast on the pitch.