Bitumen heat sensitivity can be calculated in different ways. One method is to calculate the heat sensitivity index bitumen tar permeability (Penetration index, PI) that is obtained from the following equations: 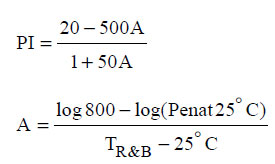 The use of polymers for enhanced performance grade bitumen road has started since 1970. Modified bitumen is less temperature sensitivity and rheological properties have been improved. Overall, almost 75 percent of Bayndrhay modified elastomer category, 15% plastic and 10 percent rubber and various amendments.

Styrene copolymer elastomeric material in blocks greatest potential for mixing with bitumen are shown. Other examples of elastomeric materials that have been used to modify the properties of bitumen, natural rubber, chloroprene rubber, styrene butadiene is made.

Styrene copolymers usually are classified as thermoplastic rubber, and thermoplastic elastic properties because they have the ability to mix together and can be produced by polymerization of styrene butadiene styrene sequentially. Alternatively, a precursor two block by polymerization with monomers styrene butadiene with sequential reaction with a linking agent is obtained. So in addition to linear polymers, branched polymers can be produced as well. SBS, including SBS block copolymer structure The chain has a two-phase morphology consisting of spherical polystyrene blocks in the matrix is ​​butadiene.

When SBS is blended with bitumen, SBS elastomeric phase Maltn to absorb a volume of 9 times the initial amount. With the appropriate values ​​SBS (5 to 7% by weight) in a continuous phase of polymer modified bitumen is created and modified bitumen properties to form the major. Since the thermoplastic rubber has a molecular weight of asphaltene are similar or more of them to dissolve in Maltn competition, and if the amount is not sufficient Maltn the bitumen phase. Bitumen phase indicates that the bitumen base used is not compatible with the polymer and thermoplastic rubber with bitumen should be careful when mixing. Compatibility with bitumen-based SBS by using aromatic oils increases. However, the use of large amounts of oil will damage the properties of SBS.

In general, the CI less (much more aromatic) the compatibility of bitumen and SBS in bitumen is therefore better dissolution.